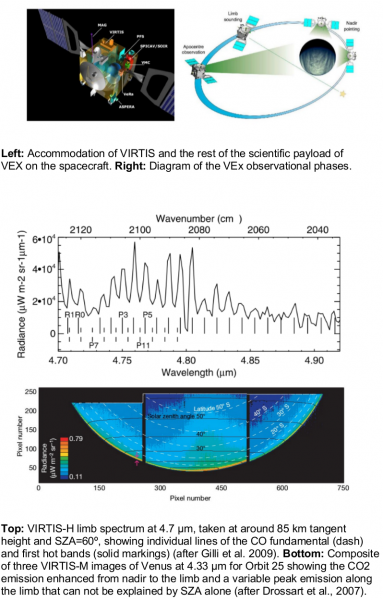 Venus Express (VEx) was the last European mission to Venus. Based on the Mars Express platform and instrumentation, it was devoted to explore some of the intriguing issues in our understanding of our sister planet, like its circulation (in particular its super-rotation), the chemistry of the hidden lower atmosphere, the radiative balance and structure of the middle atmosphere, the nature of its global cover of cloud and hazes, and the possible volcanic and tectonic activity on Venus. The ultimate goal is to learn about the long-term evolution of the planet and why has Venus become so inhospitable and different to Earth, when likely both were similar in their infancy.
Launched in 2005, VEx arrived at Venus in 2006 and orbited the planet for about 8 years, until December 2014, following a series of aerobraking maneuvers to explore the uppermost layers of the planet's atmosphere. Overall, VEx represents the major exploratory step towards systematic mapping and understanding Venus, after the successful Pioneer Venus, which orbited Venus two decades earlier.
The huge dataset taken by Venus Express is still under investigation today, more than 10 years after the publication in Nature of the first results of the mission (Svedhem et al., 2007).

VIRTIS  was one of the 7 scientific instruments on board Venus Express, that devoted to the spectroscopic mapping of the Venus atmosphere and surface. Based on a similar instrument on board the Rosetta mission, this is a French-Italian imaging spectrometer with two channels from the UV to the IR. A mapping channel (VIRTIS-M) covering 0.25-1 µm and 0.95-5 µm and a higher-resolution channel (VIRTIS-H) working in the 2-5 µm region.

Our team is co-I of VIRTIS and within its Science Team we were responsible for sounding the upper atmosphere using the strong non-LTE emissions in the dayside of the planet. Most of the VIRTIS observations are in a quasi-nadir geometry, taken from far away and very focused on the Southern hemisphere, given the peculiar and high excentricity orbit of Venus Express, but also some of the data qubes include the limb of the planet and special orbits were devoted to limb tracking near the perihelion. These are very valuable for studying the upper atmosphere. Within the context of terrestrial planet atmosphere, the upper atmosphere of Venus is highly unknown, with on-going controversies like the actual thermal structure at the mesopause, the propagation of waves from below, or where and how the global circulation changes from a super-rotation to a sub-solar-to-anti-solar regime.

Selected Results.  We analyzed the non-LTE emissions of largest interest since the beginning of the mission (Drossart et al., Nature, 2007), observed gravity wave structures in the nadir mapping of CO2 4.3 µm emissions (Garcia et al., 2009), and  were able to obtain vertical profiles of temperatures and abundances of CO above 100 km from non-LTE solar fluorescence at 4.7 µm (Gilli et al., 2015) and also thermospheric temperatures from nadir observations in the center of the very optically thick 4.3 µm band of CO2 (Peralta et al., 2016). These data were compared to a state-of-the-art Venus Global Circulation Model (GCM) which indicates that the model still requires tuning in order to explain the observations satisfactorily (Gilli et al., 2017).
Our contribution to the current understanding of the Venus aeronomy are summarized in the recent review work (Gérard et al., 2017).