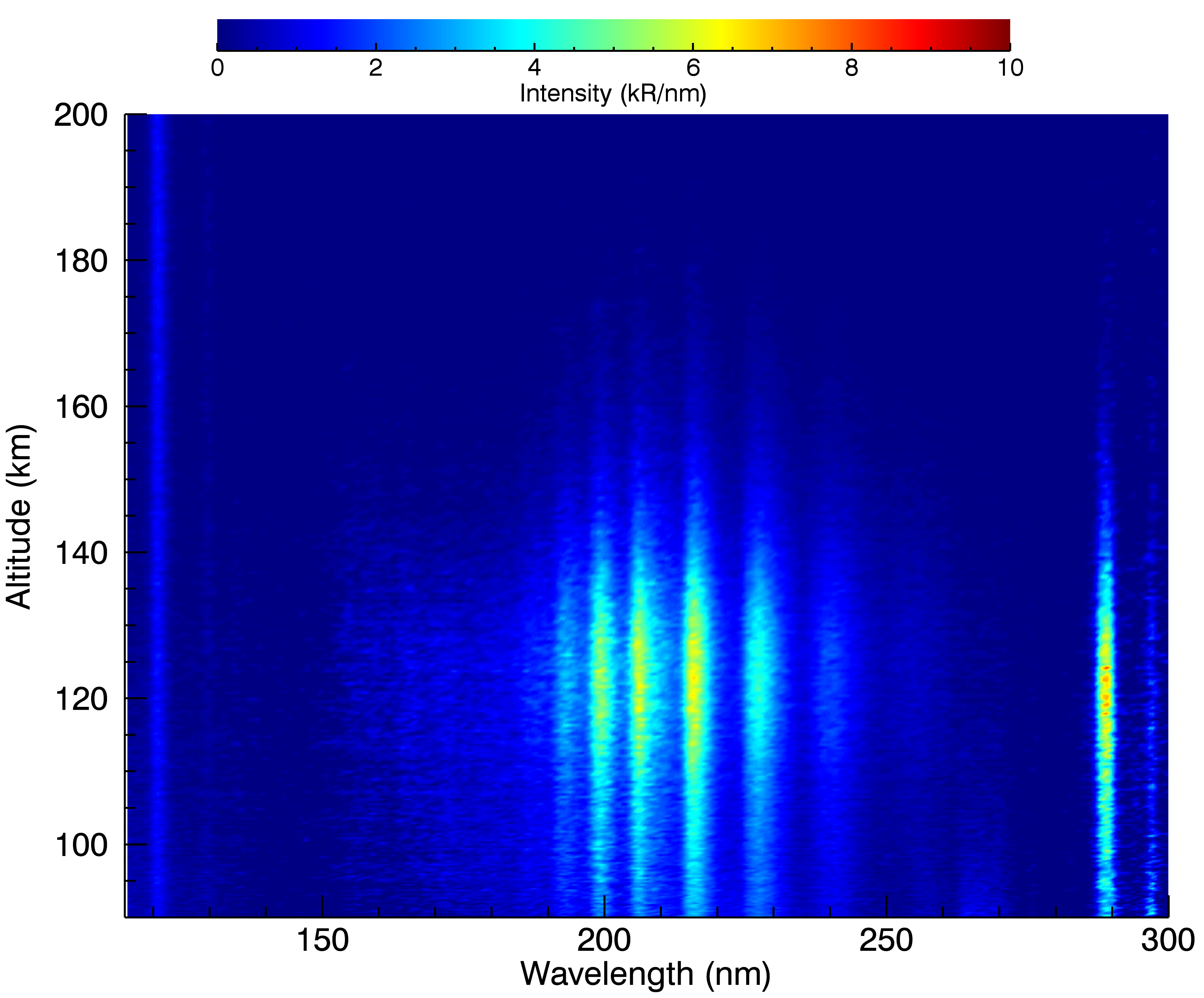 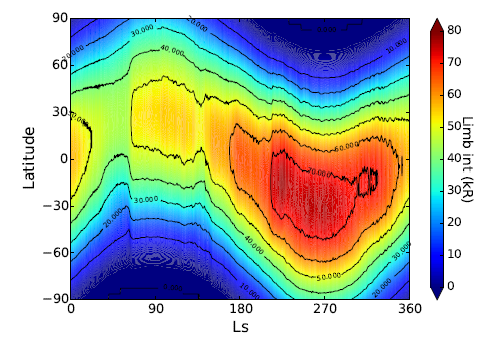 Airglow is defined as the non-thermal light emitted by atmospheric atoms and molecules, generally initiated by the interaction of the atmospheric species with the solar radiation. Like aurora, it is a typical phenomenon of the upper atmosphere, but different in that auroral emissions are originated by the action of extra-planetary energetic particles.  Airglow on Mars was first observed by the Mariner missions in the 70s, and its analysis was used to provide information about the temperature, density and composition of the upper atmosphere of Mars. This is a region very difficult to sound by other means, and still today the study of the airglow is one of the few available methods to get information on the upper atmosphere of the terrestrial planets.

Why is it so difficult to study?

Airglow emissions, including non-LTE, are specific of each species' photochemistry and of their geophysical/excitation conditions. This normally implies large variability in their intensity and distribution. Airglow emissions occur in diverse spectral regions, their sources in the upper atmosphere are weak and variable and they require sensitive instrumentation and specific modeling for its proper study. Currently the airglow of Mars is in a golden age as it is systematically measured by a small plethora of instruments on board the Mars Express, MAVEN, and ExoMars TGO missions. A number of computational models have also been developed in the last decades to simulate the different airglow emissions from Mars, moslty inspired by previous studies on the Earth upper atmosphere. Most of these are 1D models, that is, they only consider variations in the vertical direction. This neglects the effects of the atmospheric variability on the simulated emission, but until very recently there was a severe lack of systematic observations.

How we study airglow on Mars

Our group has a long tradition in the study of the atmospheric airglow on Mars and on other terrestrial planets. Recently, we have studied the 4.3 µm CO2 emission measured by OMEGA/Mars Express to characterize the variability of the upper atmosphere of Mars (Piccialli et al.,  2016). We have also analyzed SPICAM/Mars Express observations of two of the most prominent emission systems in the UV dayglow, the Cameron bands (~180-260 nm) and the CO2+ UV doublet (~290 nm) (González-Galindo et al., 2018). We have also built the first global model of these atmospheric emissions by incorporating a module to calculate their intensity into the LMD-MGCM. We have also simulated the NO nightglow, and participated in the analysis of its observations by SPICAM/Mars Express (Gagné et al.,  2013) and IUVS/MAVEN (Stiepen et al., 2017). Currently, we work in the derivation of CO2 density and temperature from the 4.3 µm CO2 emission measured by OMEGA/Mars Express and the CO2+ UV doublet measured by SPICAM. We have also proposed to investigate airglow emissions using TGO/Exomars 2016 instruments NOMAD and ACS (López-Valverde et al., 2019), in particular the exploitation of the CO2 emissions in near-IR bands with the objective of retrieving CO2 density in the upper atmosphere.