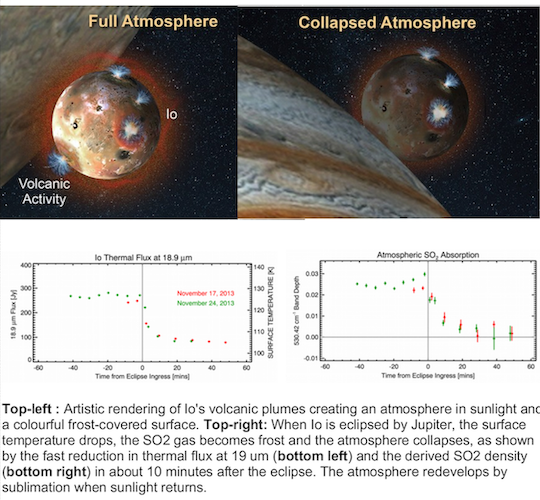 Io, a volcanic world around Jupiter with a tenuous atmosphere.

The innermost of the four Galilean satellites of Jupiter is a unique world. Unlike its brother satellites, mostly composed of water ice, Io is composed of silicate rock around a molten iron-sulfide core. In fact, it has the highest density of all the moons and the least amount of water of any known object in our planetary system. Most interestingly, the internal friction and heating due to the tidal pull of Jupiter and the resonance with Europa and Ganymede, makes this the most geologically active body in the Solar System, with over 400 active volcanoes. These expel plumes of sulfur and sulfur dioxide (SO2) which generate a torus of plasma around Jupiter. These gases also condense as frost, which together with the lava flows, give Io its characteristic colorful surface.

Io has a very thin atmosphere of SO2, mostly localized within 40º in latitude around the equator, where the surface is warmest and most volcanoes reside. Its atmosphere presents significant variations in density and temperature with time of day and with volcanic activity. This has triggered a long debate over which is the dominant source of the atmospheric SO2, whether volcanic activity or thermal equilibrium with the frosts on the surface.

Ground-Based atmospheric observations in the IR

Our team has participated in a campaign of ground-based observations in the IR, in order to track the SO2 abundance using its absorptions and emissions at 19 µm, which in such a tenuous atmosphere are in non-LTE (Spencer et al., 2005). This is important since IR represents a third window to study Io, in addition to the previous efforts in the UV and radio (microwave). The campaign started in 2001 and extended until 2013, as we soon found that long term observations were required to ascertain the role of the diverse sources of variability. In particular we wanted to study the atmospheric behavior along a Jupiter year, from aphelion (2004) to perihelion (2011). The interpretation of these observations required specific radiative models. This has been done in collaboration with the Southwestern Research Institute (SRI), in Texas, which led the study, and the Observatoire de Paris. Most observations of Io were carried out by the SRI team using the instrument TEXES in the IRTF telescopes in Hawaii. We found an enhancement in density with decreasing heliocentric distance (Tsang et al., 2012).

The most interesting result was obtained In 2013 when we performed observations of an Io eclipse with a larger telescope, the 8-m Gemini North. These are difficult observations which require both high spectral and time sensitivity. We found a drop of a factor 5 in density (80% of the atmosphere disappears – condenses as SO2 frost on the surface) during the eclipse (Tsang et al., 2016). Wen the Sun heats the ices, these sublimate and the atmosphere is re-generated. This therefore solves this long enigma, as we could observe and model how the surface seems to be the major source of the SO2 in the atmosphere, although volcanic activity still adds a significant source. Ultimately, all the surface SO2 frost comes from volcanic activity throughout Io's history.