The Visual and Infrared Mapping Spectrometer (VIMS) measurements of non-Local Thermodinamic Equilibrium (non-LTE) emissions of CH4, HCN and C2H2 in the near-infrared represent a dataset with unique coverage to study Titan's upper atmosphere in the altitude range from 500 to 1000 km. This region is the key to a better understanding of the middle atmosphere circulation. The assessment of the latitudinal and seasonal variations in the distributions of HCN and C2H2 could give important hints about it and complement the Composite InfraRed Spectrometer (CIRS) observations, that target the atmosphere below 500 km. The measurement of CH4 and HCN above 900 km can also help in understanding the Ion and Neutral Mass Spectrometer (INMS) observations near and above 1000 km. We have analysed the VIMS daytime spectra in the 2.9–3.4 μm region measured from 2004 to 2012 that span from the mid-northern winter through mid-northern spring Titan seasons. The measurements exhibit very strong non-LTE emissions of CH4, HCN and C2H2. Non-LTE vibrational temperatures have been calculated for the emitting levels of the three molecules, and have been used in the inversion of their abundances in the 500–1100 km region. The 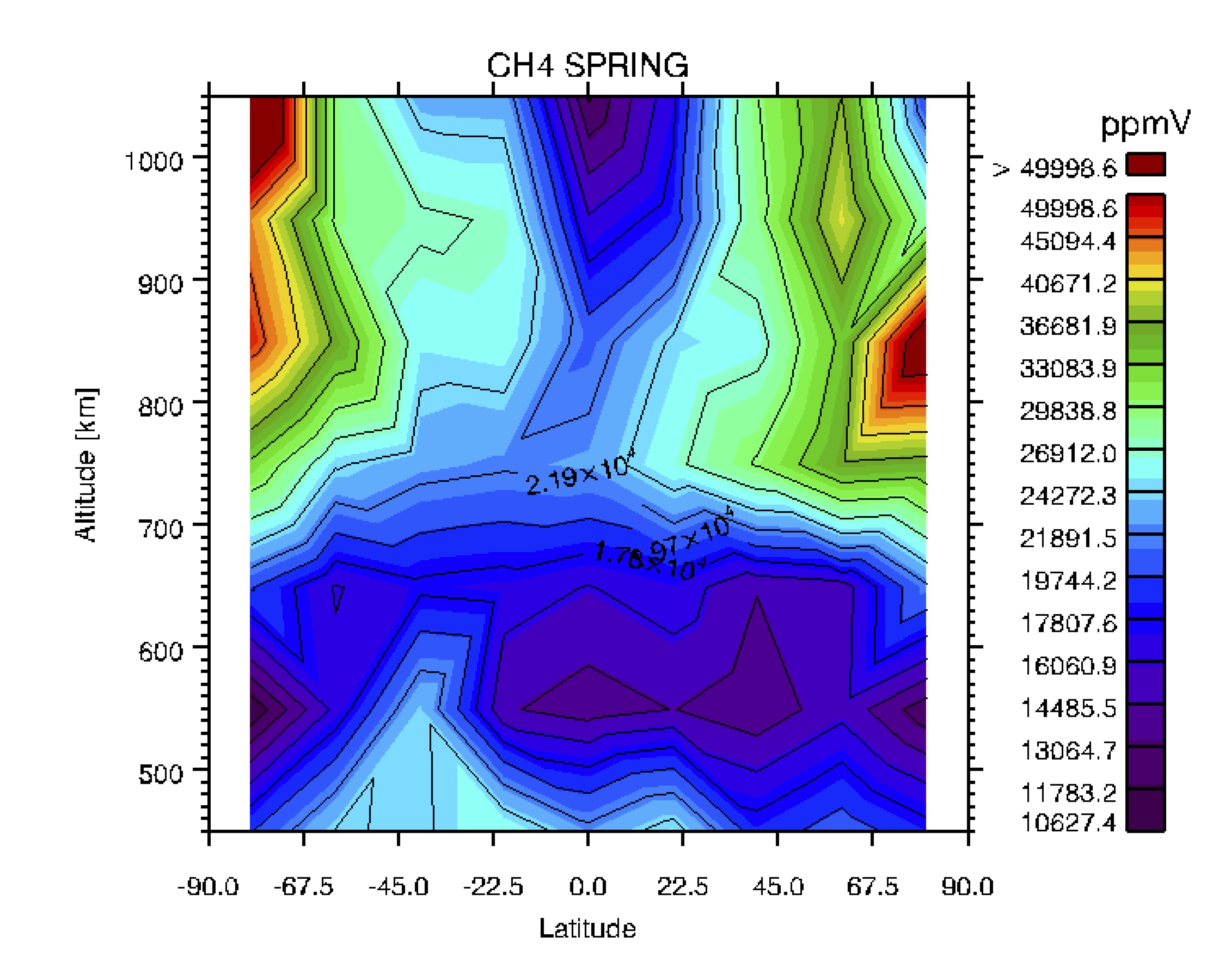 retrieved abundances have been averaged in latitudinal bins and in two seasons: north hemisphere winter (2004–2009) and north hemisphere early spring (2010−2012). The C2H2 average profile, retrieved for the first time from VIMS measurements, shows good agreement with UltraViolet Imaging Spectrograph (UVIS) measurements below 850 km, while higher values are found above that altitude. The HCN volume mixing ratio (VMR) shows an enhancement at the north pole during winter at all altitudes (from ∼700 km up to near 1000 km) and at the north and south poles during spring below 900 km. Also, the average C2H2 abundance is larger at both poles during spring below 800 km, while no significant variation is seen during winter. For CH4 we found enhancements above 800 km at the north pole during winter and at both poles during spring. Our results suggest that the middle atmosphere circulation on Titan extends well above the 500 km level, up to 750–800 km or even higher if we assume that the CH4 concentration above 800 km is mainly controlled by the circulation. The behavior of CH4 at the winter pole above 800 km is in line with the strong zonal winds suggested to explain INMS observations, although it can also be explained by the slower photo-dissociation occurring during polar winter. Despite the poor statistic at the polar regions, our results represent a unique dataset that could help to improve our understanding of Titan's atmosphere above 500 km (Dinelli, López-Puertas et al., 2019).