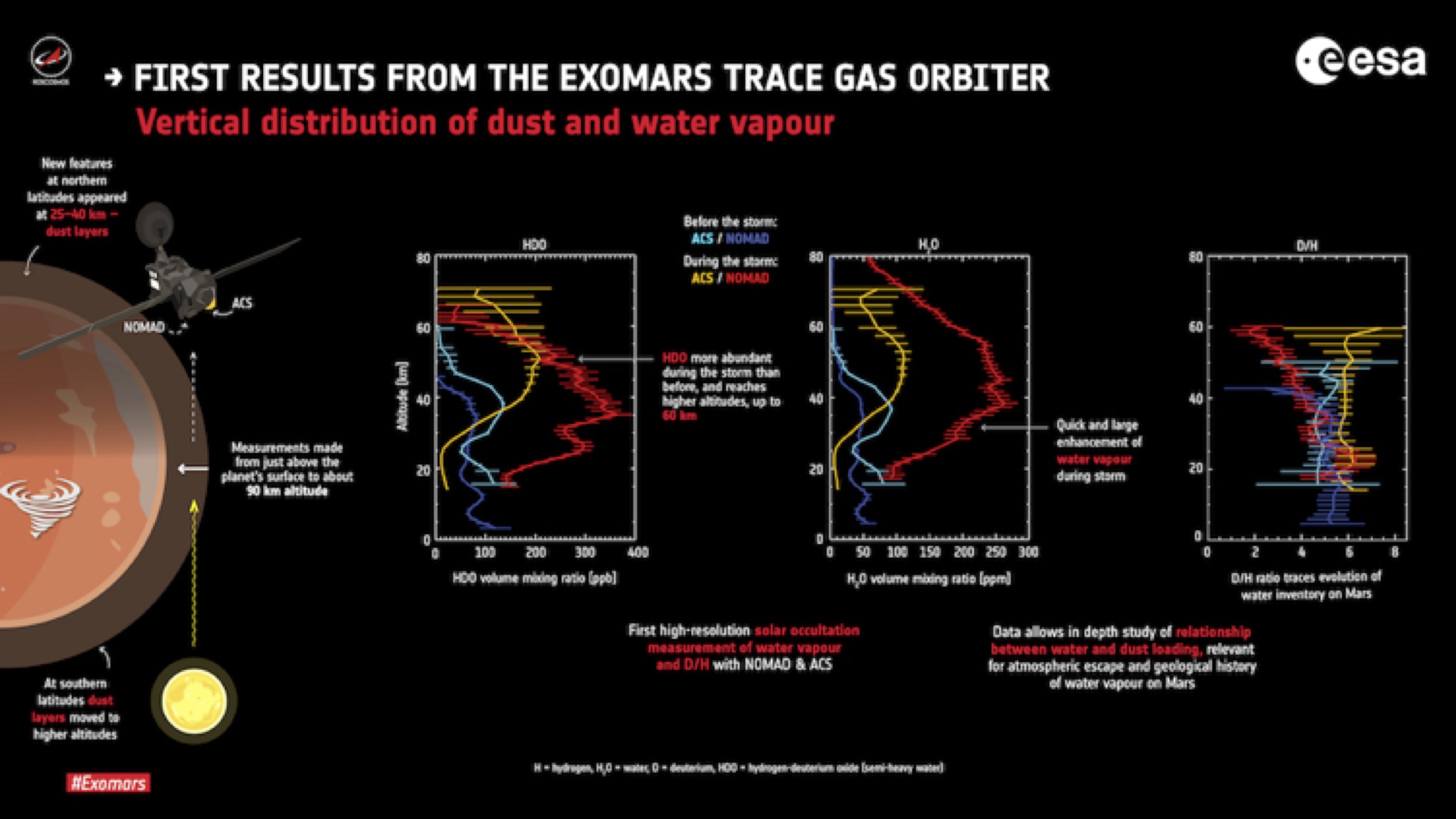 Two spectrometers (NOMAD and ACS) onboard TGO made the first high-resolution solar occultation measurements of the martian atmosphere. This enabled the vertical distribution of water vapour (H2O) and ‘semi-heavy’ water (HDO)  to be plotted from close to the martian surface to above 80 km altitude. The measurements were taken during the onset of dust storm on Mars, and hence we tracked the influence of dust in the atmosphere on water.

During the storm we see in the northern latitudes dust clouds at altitudes of around 25–40 km that were not there before, and in southern latitudes we see dust layers moving to higher altitudes.

Dust absorbs the Sun’s radiation, heats the surrounding gas and causes it to expand and, in turn, redistributing water vapour over a wider vertical range. At the same time, thanks to the higher temperatures, fewer water-ice clouds form and hence water is more in the gas (vapour) phase and prone to be transported to higher altitudes. Also, dust storm produces a higher temperature contrast between equatorial and polar regions, thus strengthening the equator-to-pole atmospheric circulation leading to more water vapour in the polar regions. As an overall result, we found that water is more abundant and extent to higher altitudes and to the polar regions during the storm.

The enhancement of water vapour in the atmosphere happened remarkably quickly, over just a few days during the onset of the storm, indicating a swift reaction of the atmosphere to the dust storm. The observations are consistent with global circulation models.

We also made the first observation of semi-heavy water simultaneously with water vapour, providing key information on the processes that control the amount of hydrogen and deuterium atoms escaping to space. We could also derived the deuterium-to-hydrogen (D/H) ratio, which is an important marker for the evolution of the water inventory on Mars. Since the D/H ratio is predicted to change with the season and with latitude, TGO’s continued regional and seasonal measurements are expected to provide further evidence of the processes at play. More information at: https://rdcu.be/bvP1d